It’s been almost three years since we pulled up in front of a house in Monroe, WA to meet Wylie, a 10-year old yellow lab whose parents were moving out of the country. We had initially agreed to take him on a week-long trial 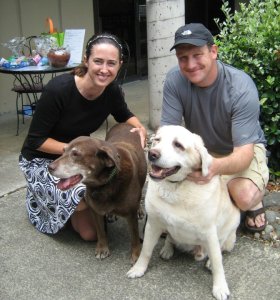 visit because he was blind and neither one of us had any experience with blind dogs. But we knew as soon as we pulled up in front of the house and saw his sweet face as he sat there wearing his red bandana that the trial visit would probably turn out to be something a lot more permanent.

And today, we can say that taking a chance on that old blind dog was one of the best decisions we ever made. Today we said good-bye to Wylie and, as we sit here and reminisce through our tears, we are trying really hard to be grateful for the time we had with him instead of being heartbroken about the fact that he is gone. We’ve known for a few months now that things were probably heading in this direction, but it doesn’t make it any easier when the moment actually arrives.

Wylie taught us a lot during his time with us and we want to share some of those learnings with you. Here are some life lessons from an old dog:

Take care of each other.

A few months prior to adopting Wylie, we adopted a senior chocolate lab, Molly Malone. Molly came from a shelter and we don’t know what her life was like before we met her, but she had a severe case of separation anxiety. Once we adopted Wylie, however, Molly never again panicked when we left the house. It took her a few days to adjust to sharing us with another dog, but she quickly leaned on him for emotional support and took comfort in his friendship. And while Wylie was comforting Molly, she comforted him in return. By snuggling him she let him know that he wasn’t alone, she kept him grounded and made him feel safe and secure. Even though he couldn’t see her, he knew his best friend was always there.

Be kind to everyone you meet.

Wylie never met a person or an animal he didn’t like. And whether it was his first time meeting them or his hundredth time, the reaction was always the same: a rapidly wagging tail. The first time we met Wylie his birth mom, Tina, told us that she believed he still had a lot of love left to give. And she was right. Wylie brought an incredible amount of love into our lives and into the lives of everyone he met. He was the kind of dog who could (and did) teach small children not to be afraid of dogs. He was gentle, he was loving, he was kind.

Change is only hard if you make it hard. Wylie went through a lot of change in his last few years. He left his lifetime family and came to live with us, which meant learning to navigate a new home, as well as

learning to navigate relationships with his new canine and feline siblings. About a year and a half after he arrived, we packed everyone up and headed out in an RV to travel the country for 7 months. Every time Wylie stepped out the door of the RV he was in a new place with new smells and new potential hazards for a blind dog to navigate. Then, just when he thought we were settling back into life in Seattle, he lost his best friend Molly, we moved him across the country (which meant a week in the car and a different hotel room each night), he had to learn to navigate another new home, and then we brought a new dog into the family. If anyone had a right to complain about change being hard, it was Wylie. And yet, he never did. He just went with the flow and took everything in stride. 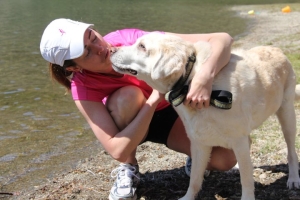 and chairs and doorways and trees and fences and people and dogs and anything else a blind dog could bump into. But the beauty of Wylie is that he just kept moving forward. He didn’t lie down and give up. He adjusted his plans and tried a new path. While it was painful to watch, especially at first, some of the best advice we ever received was to let him bump into things so he could figure out where everything was. It was amazing to watch him feel his way around and try a new path when the first one didn’t pan out the way he had hoped. Definitely a life lesson we should all remember.

In addition to learning some important life lessons from Wylie, we also ended up with some really great friends because of him. His other parents, Carey and Tina, are people we anticipate having in our lives for many years to come. Our paths may have crossed because of a sweet old blind dog, but they are a wonderful couple we now call friends. We are grateful that they trusted us with their sweet boy and, even though they moved halfway around the world, we have no doubt that our paths will cross again.

Oh – and because we typically don’t know the history of our old dogs – we also don’t usually know how cute they were as puppies. Since we are friends with Wylie’s parents, however, we do have two very cute puppy pictures to share. (Seriously, could he be any cuter?!) 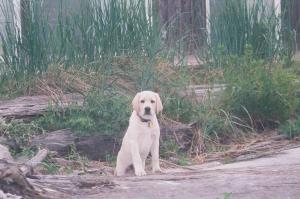 And a few more things about Wylie…he loved his pillows, he loved his fan, he loved his Molly. He loved to eat and he loved his treats. And he had a strange love of peeing in the water. It was pretty much inevitable that if we found a lake or an ocean for him to wade into, he would soon squat down and pee. We haven’t found any dog-friendly beaches in Savannah, but a few weeks ago we did find one about an hour and a half south of here on Jekyll Island. Wylie had a fun day at the beach, he was loved on by some cute little girls who came over to meet him and he was able to pee in the water one more time. 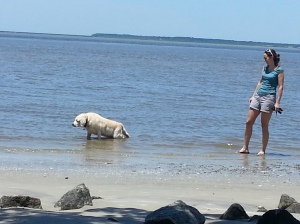 We know that by adopting geriatric dogs we will go through this grieving process more frequently than most people. But we believe it’s worth it. There is something so special and wise and gentle about old dogs and they give us far more than we could ever give them. We will forever be grateful for the time we had with Wylie, even if right now we are heartbroken over our loss.

Goodbye, sweet Wylie. We love you. Say hello to Molly for us.

8 thoughts on “Life Lessons From an Old Dog”